From 27 July to 25 September 2020, Galerie Tanit Beirut presents REMAINS OF THE LAST RED ROSE, a show of a series of new “black paintings” entitled Nyctophilia by Lebanese artist Abed AlKadiri, at the very moment we descend more deeply into darkness, both literally and figuratively. Dwindling fuel, silenced generators, an economy in free fall, the street all but abandoned as a site of revolt—why exhibit darkness in such dire times?

Painted between 2018 and 2019, the works in Nyctophilia are neither a literal reaction to the prevailing gloom, nor some flourish of autobiographical introspection. Rather, they summon us to confront, consider and reflect. Perhaps, the paintings suggest, it is in this inclination and longing (-philia) for the night or darkness (nycto-) that we ultimately encounter enlightenment. Here, paradoxically, black seeks clarity—a blinding embrace of all the colors at once. A glimmer stirs beneath the sooty layers; our path is bookended by throbs of white. Yet these layered, complex works rebuff reductive binaries (hope/despair, progress/retreat) and pat interpretations. Black, in AlKadiri’s hands, is never really black.

Exhibited as a sequence of “scenes” punctuated by poet Maryam Janjelo’s prose-poems, Nyctophilia is hinged to a previous body of work, Arcadia (2016-17), a series of paintings imagining tenuous utopias inhabited by “rescued” refugees. Culled from this series, the initial work displayed in this exhibition, “The Vow” (2016), startles by its optimism: a couple, savoring a rose, is harmoniously subsumed into the gleaming mesh of forest and foliage. “The remains of the last red rose,” a line from one of Janjelo’s texts, evokes the dialectical entanglement in which Nyctophlila and Arcadia are caught. This is utopia’s flipside, harsh and riddled with despair, where black seeps into hope, just as color bleeds into darkness. 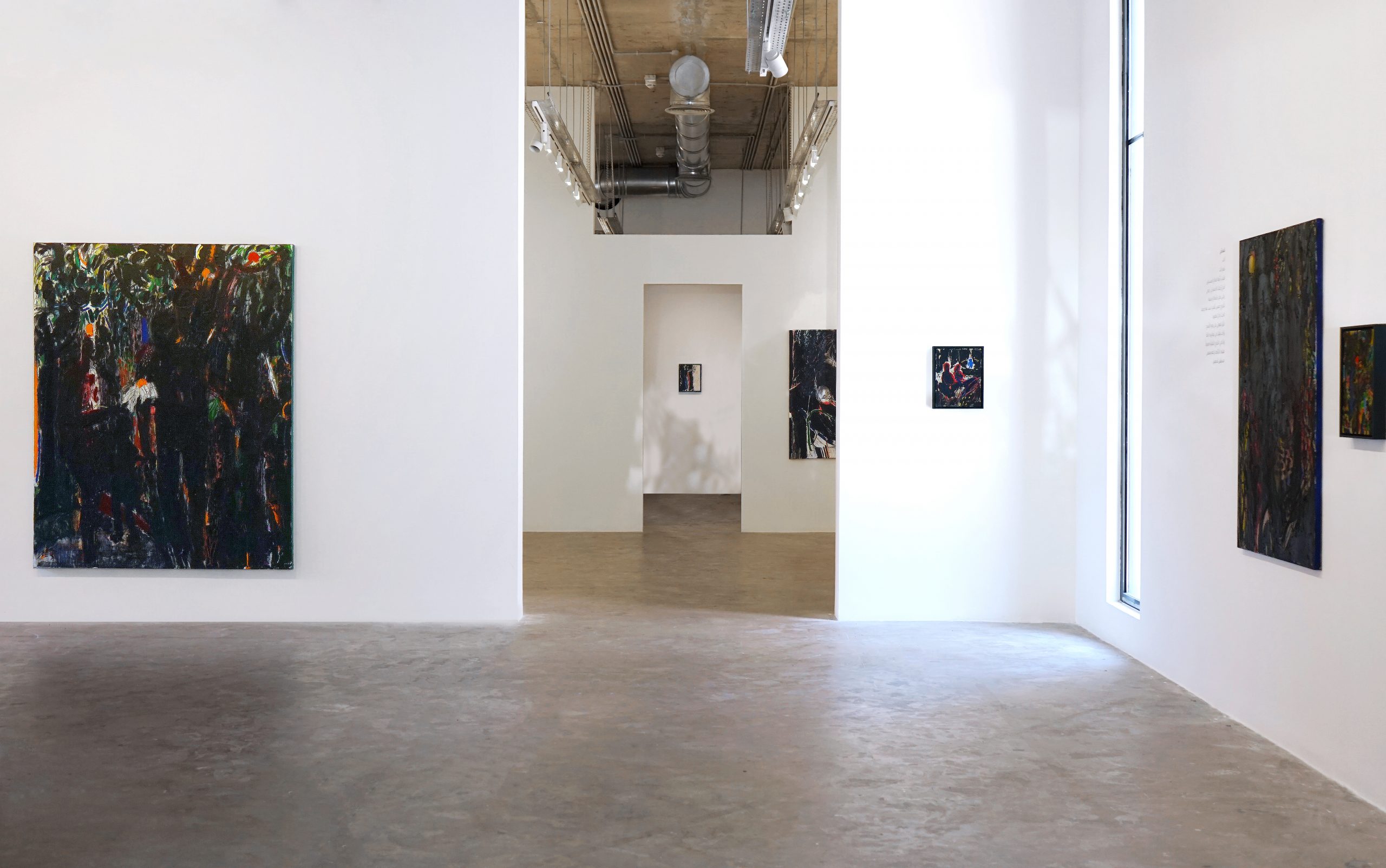 If the world is a dark place, Lebanon is its epicenter.

Obscurity is AlKadiri’s medium. Driven by insomnia, anxiety, and disorientation during the six months of the series’ creation, he came to relish not just black, but its transformative promise of oblivion. Disturbed waking states propelled the artist to engulf the previous day’s painting in impulsive swathes of black paint, at once obliterating and eternalizing the raw charcoal-sketched figures and the writhing colors beneath. Indomitable, though, the teeming colors dance through the charred-black surface; the figures hover, spectral yet resolute. In “Family Portrait” (2018), for example, the final work in the Nyctophilia journey, a parent-child triangle is cloaked almost entirely in black, save a patch of white swaddling the youngster. At once absent and present, the image of the family challenges its own unity, the shaky contours blurring the certitude of this presumably natural unit. The very concept of family, the work implies, is illusive.

Through darkness, Nyctophilia evokes enlightenment. Dark is an excess of light. A jolt of colors blinds us: instantly, we see only black. “In this ode to a such a charged hue—so wound up in constructing identity—I let black grasp all the colors,” explains AlKadiri. “I wanted to give it a new meaning: one of clarity. It cuts to the essence of things and feelings.” In spite of this, Nyctophilia revels in a state of incompletion: like an insomniac’s sleep, the works are unsettled, tentative. Scrawled, scratched figures traipse across fields riddled by gaping blanks. Finely finished details cohabit alongside abrupt shorthand strokes: raw sketch marks poke out between sharp fronds of black; a muddled sky floats between a perfect frame of shadowy trees. Achievement is impossible; completion is a lie. In Nychtophilia, even black is never certain. 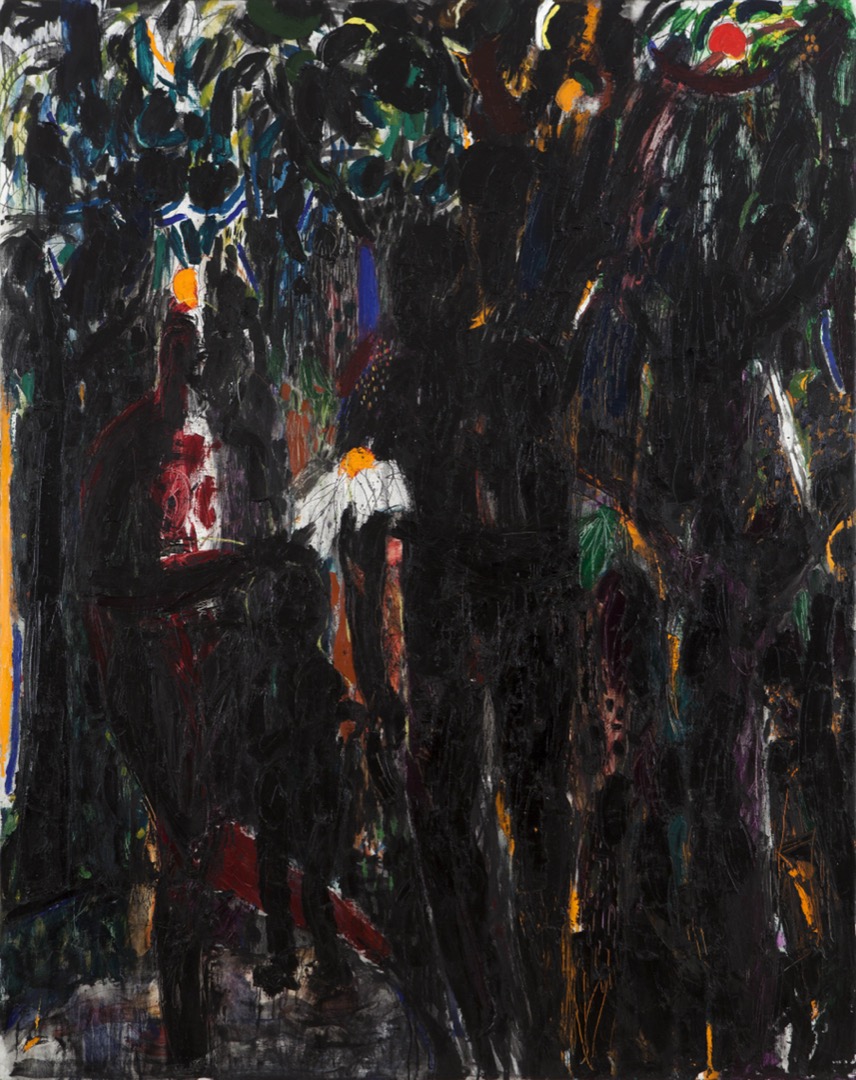 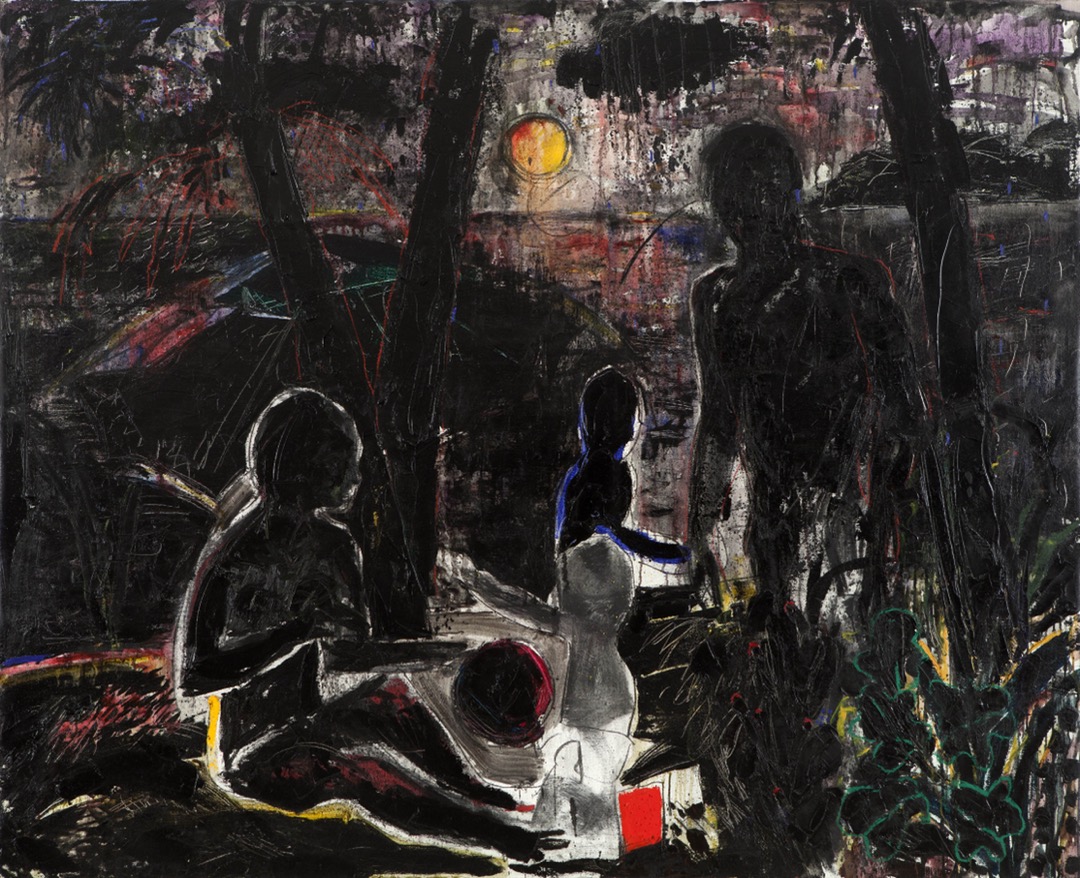 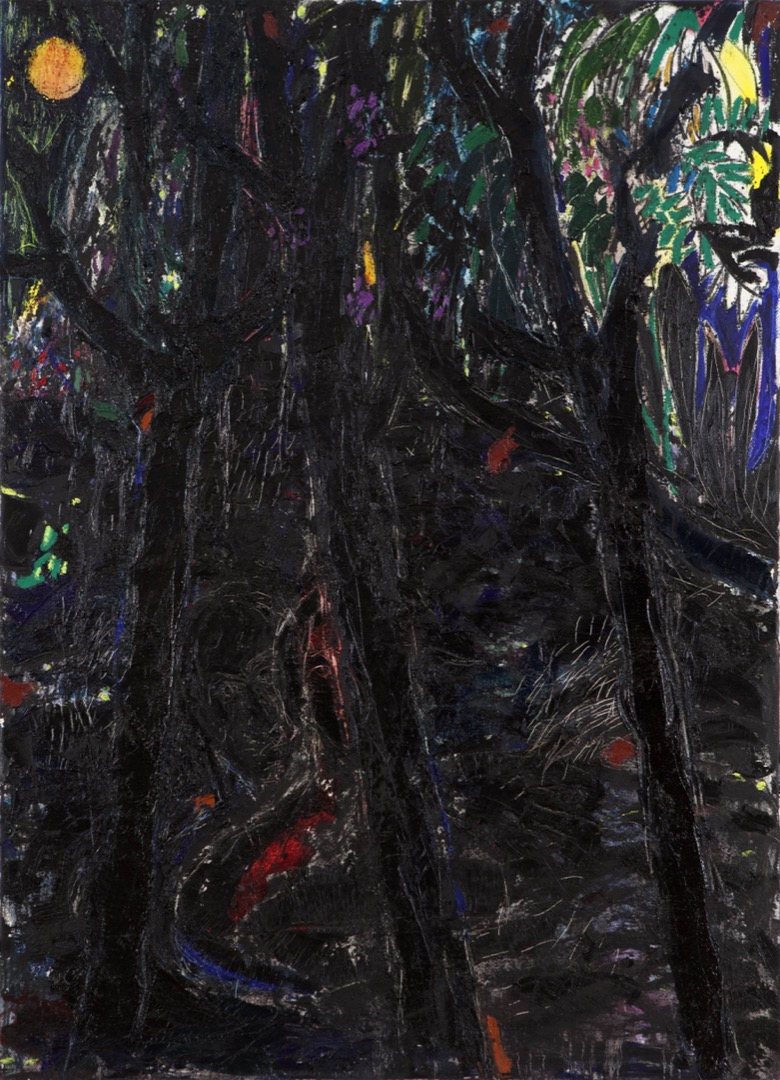 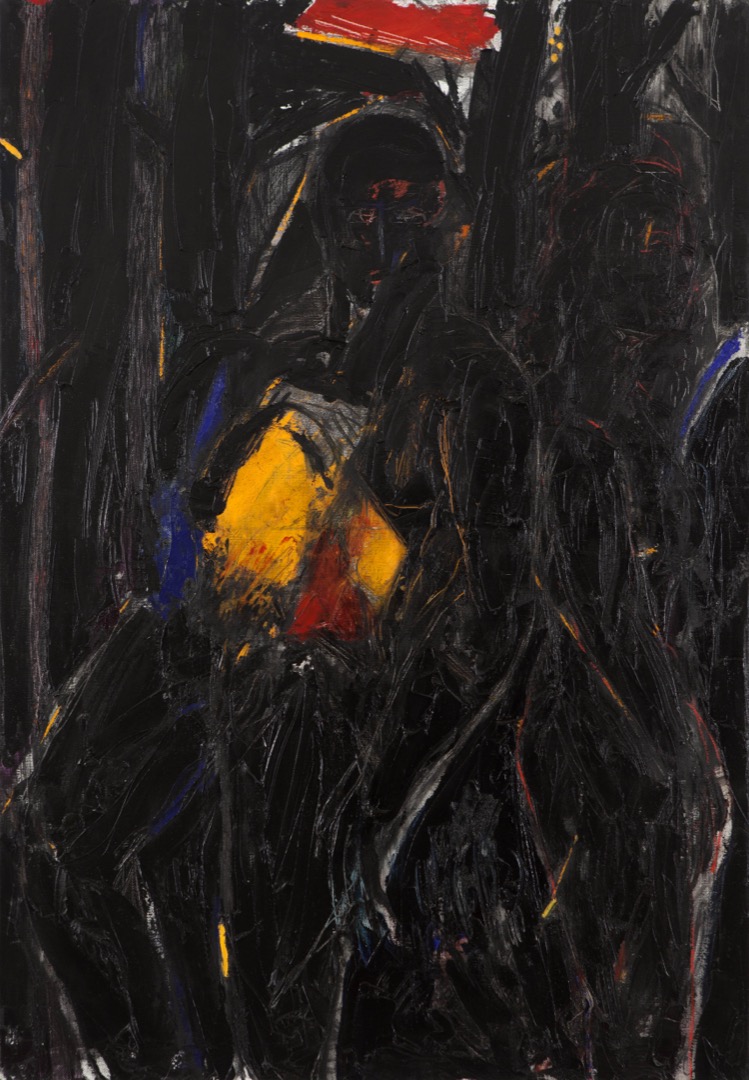 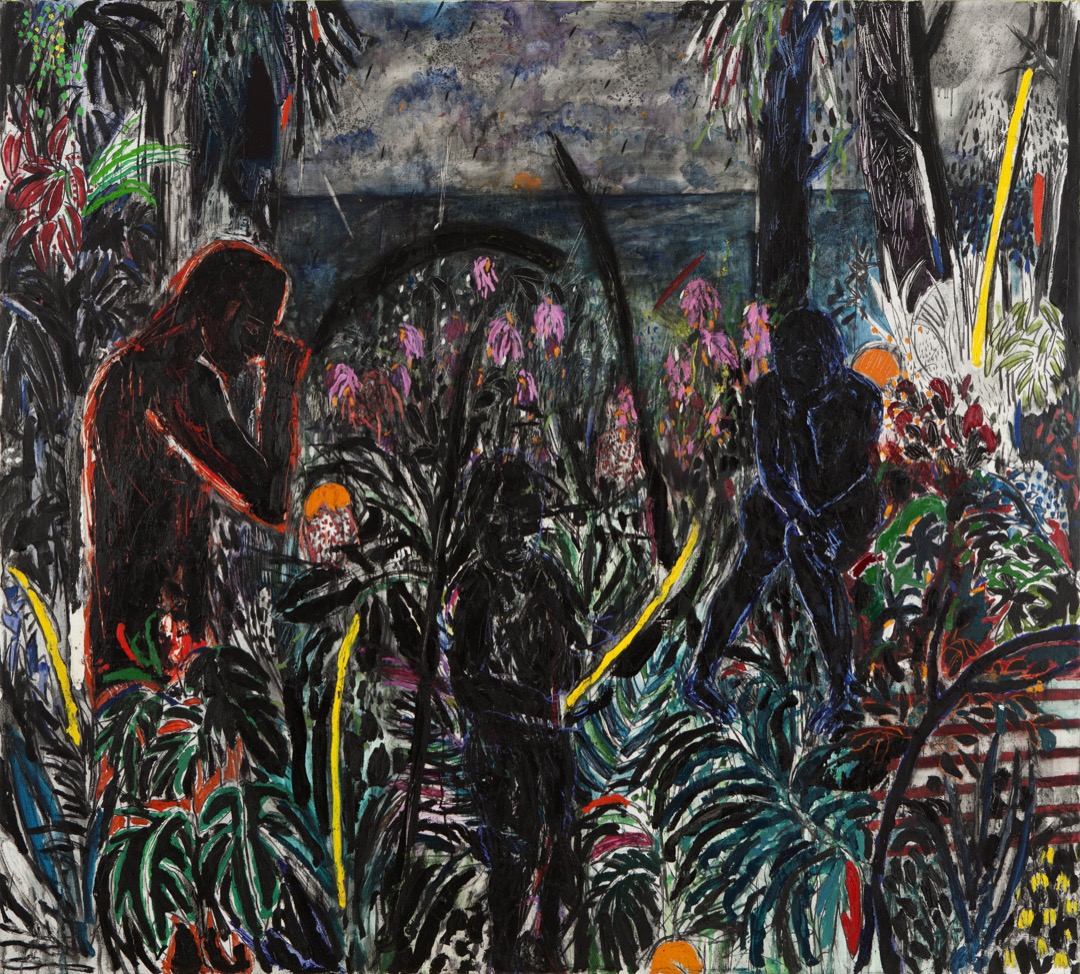 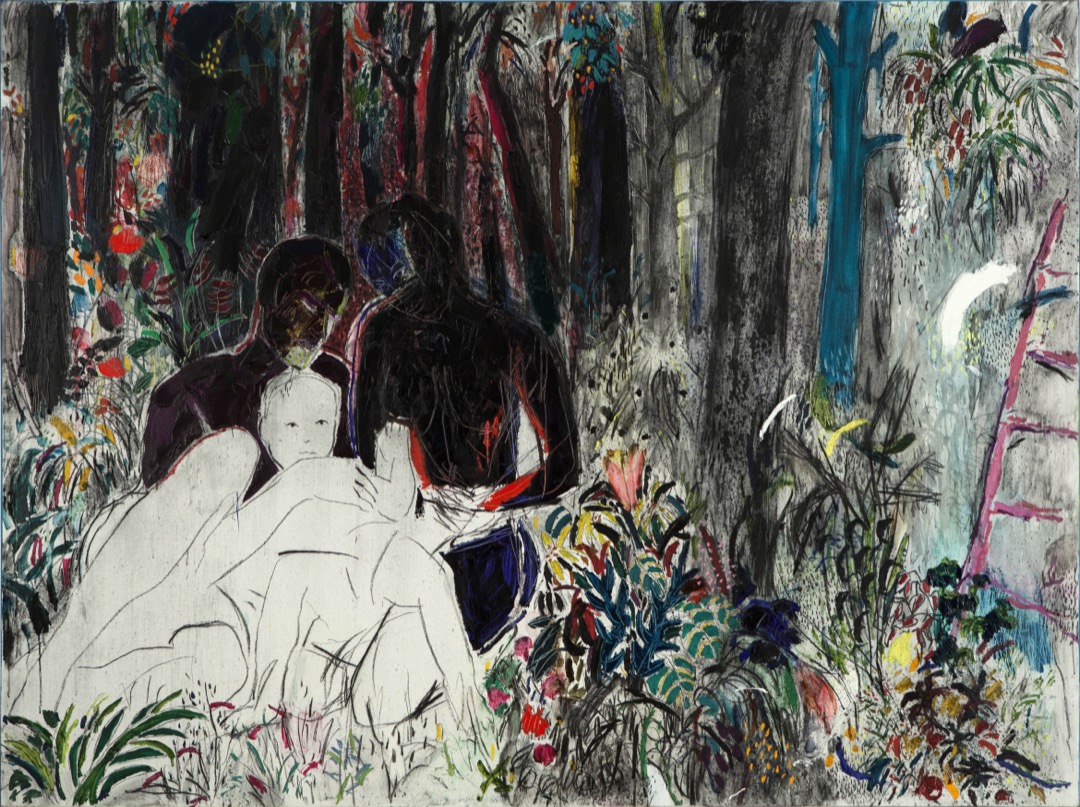